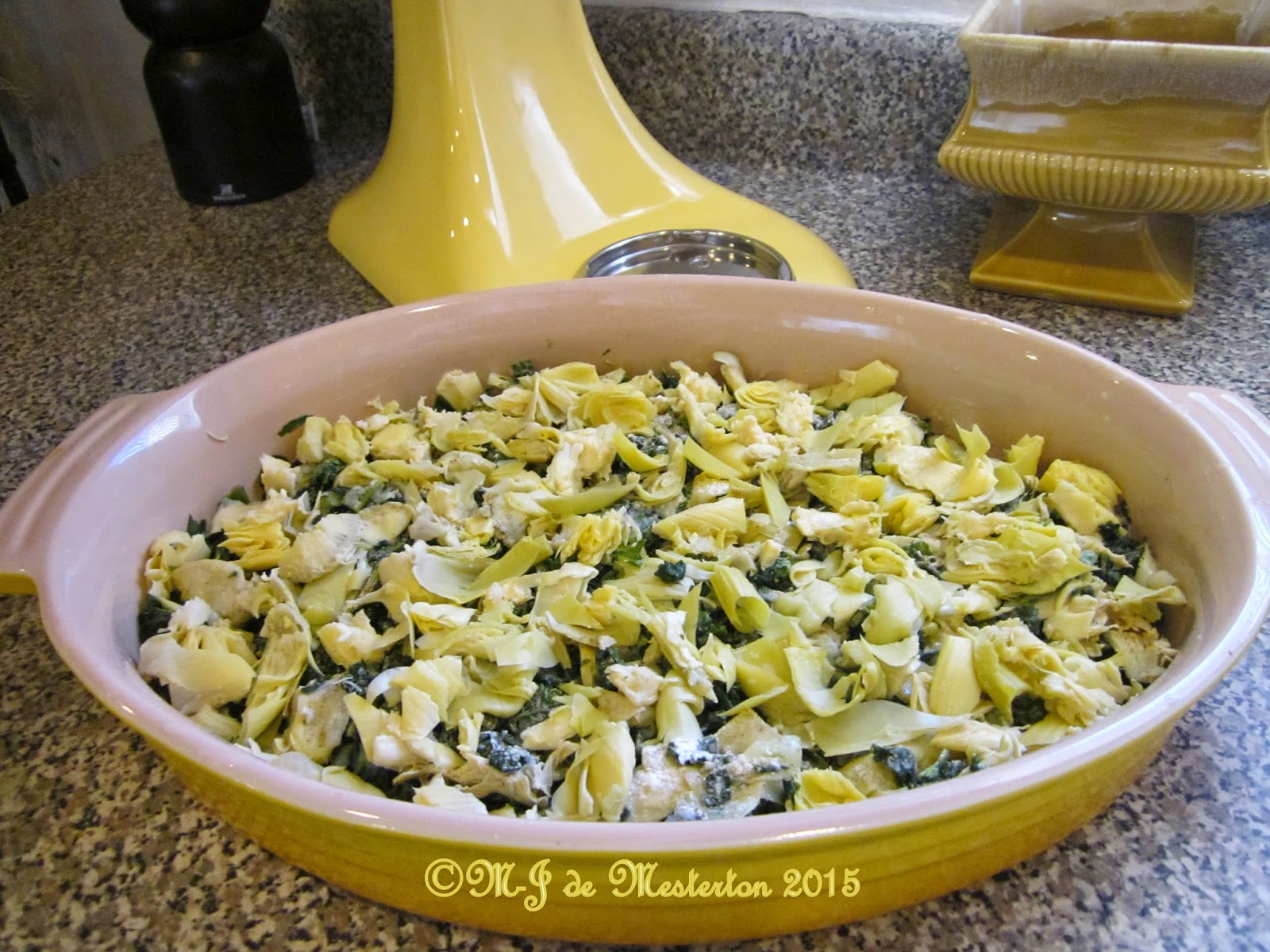 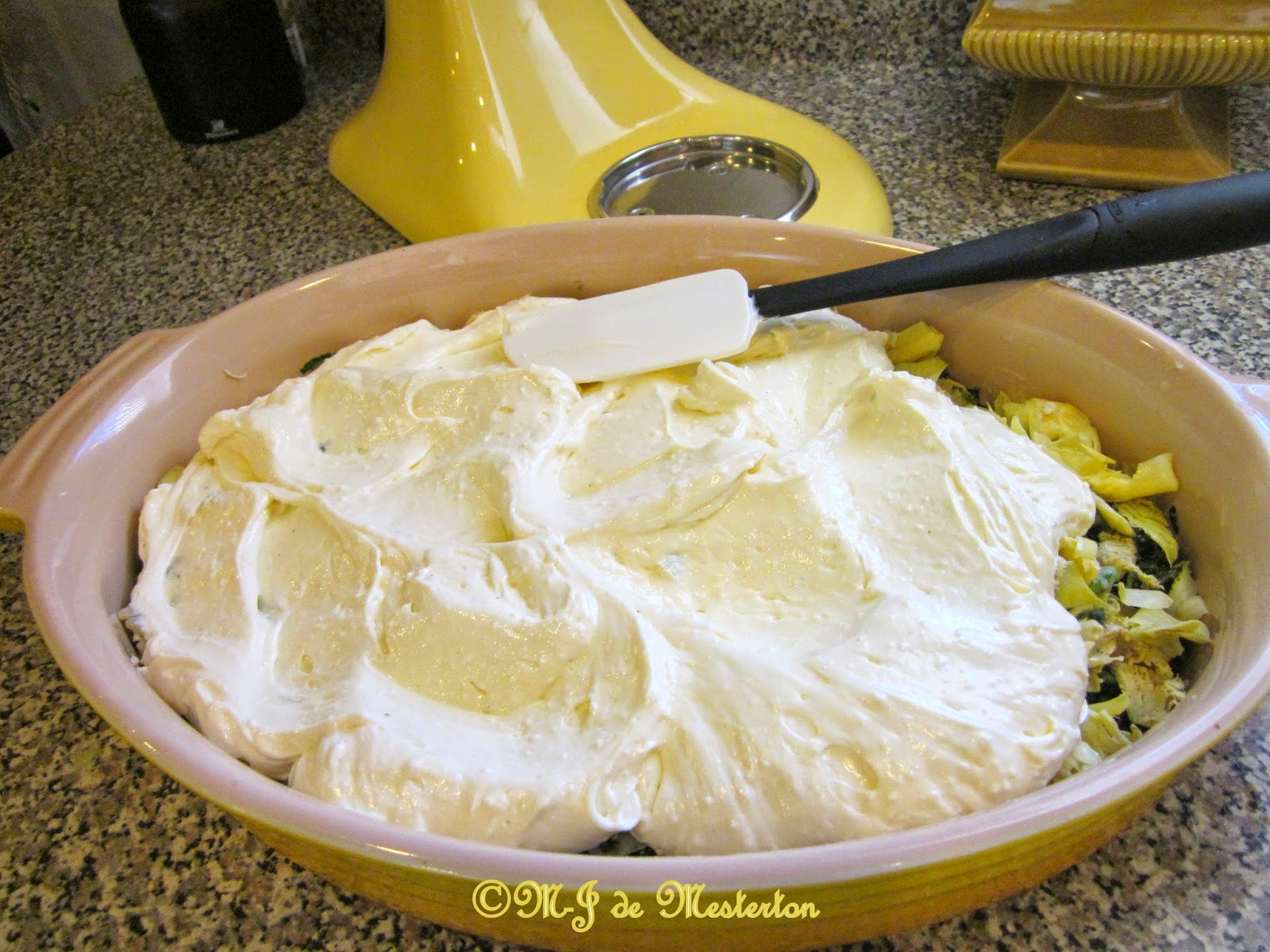 Softened cream cheese, mayonnaise, and a little milk to facilitate spreading, are whipped together into a topping. 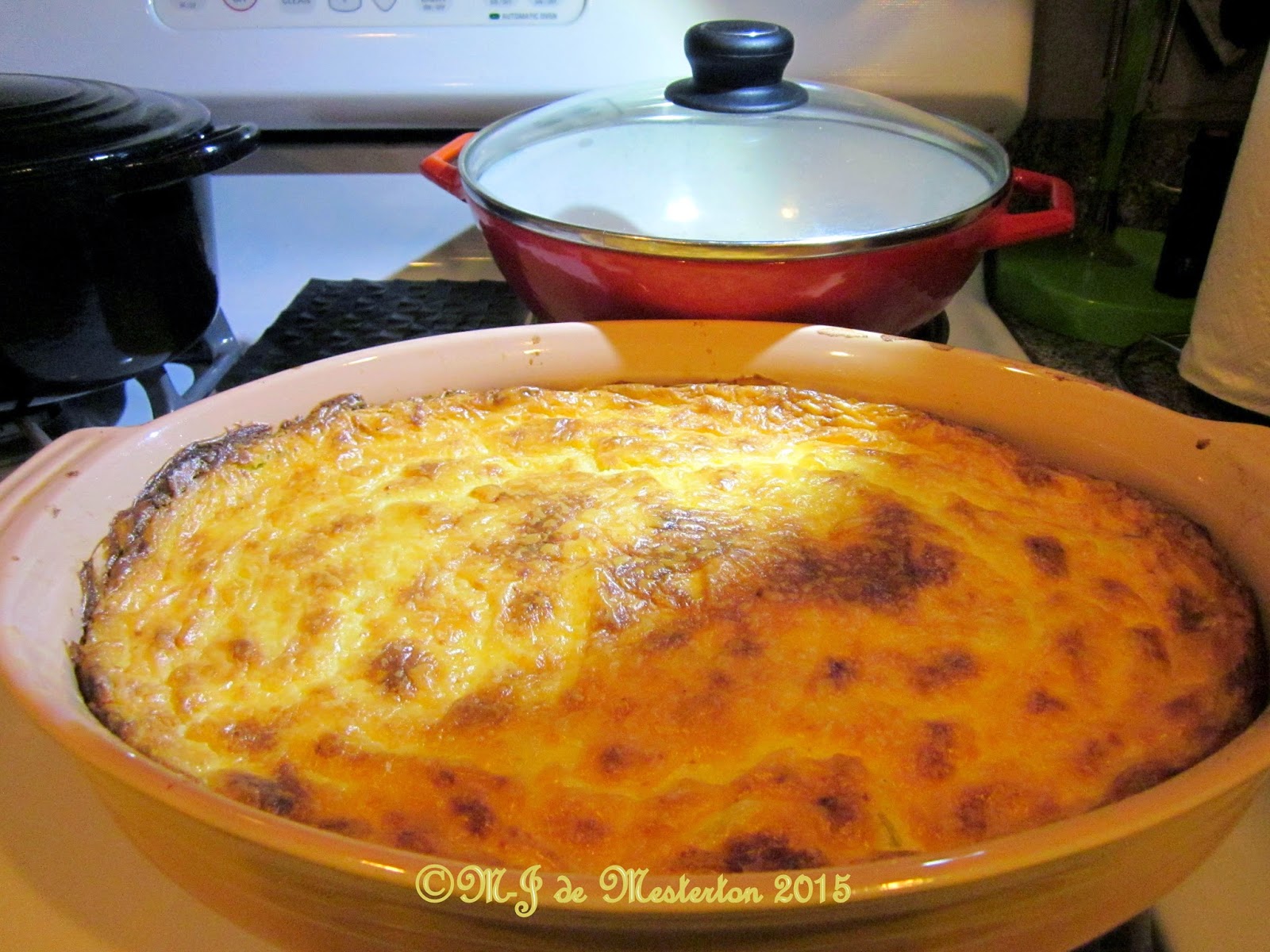 The assembled artichoke-spinach casserole is baked in a medium-hot oven for 35 to 45 minutes.
©M-J de Mesterton 2015

It seems that everyone adores pecans, either prepared in pastries or raw. The following recipe transforms this popular American nut into a simple, savoury canapé. I have been making these elegant, crispy pecans to accompany drinks at festive gatherings for two decades.

In a large pan, melt two tablespoons of butter over medium heat. Add a half-teaspoon of seasoning salt. Pour into this mixture three tablespoons of Worcestershire sauce. If desired, sprinkle in some cayenne pepper to your taste. Mix. Into the pan, add your three or more cups of whole, raw pecans. Using a wooden spoon, stir these seasoned nuts frequently over a medium flame. Remove one, let it cool a minute, taste and adjust your seasonings accordingly. Continue to stir pecans, roasting them on both sides. When the pecans become a bit darker but are not burnt, they are ready to spread out on a large platter to cool. Once these savoury pecans are room-temperature, they will have assumed a crispy and non-greasy consistency. Serve immediately or store them in an attractive tin, where they will last approximately two weeks. 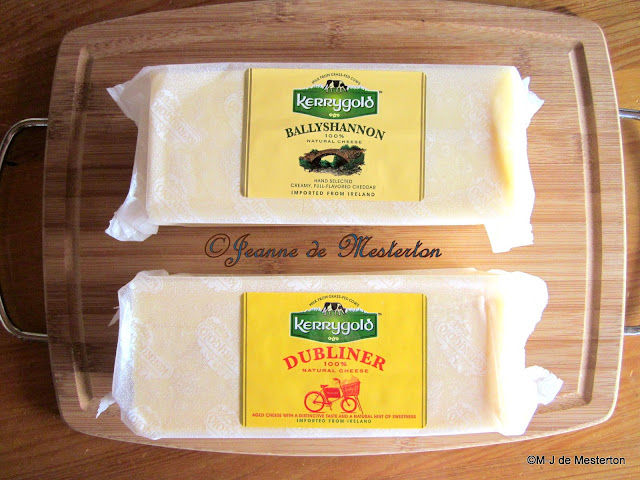 Ballyshannon is a flavourful Cheddar style cheese that is soft and properly crumbly at room-temperature.
Dubliner, also made in Ireland by Kerrygold, is a rich, mild and clean-tasting cow's milk cheese.
©Jeanne "M-J" de Mesterton, 2012

Ardsallagh Goat’s cheese- From Carrigtwohill, near Cork city, this family run cheese-producer specialises in goat’s cheese (soft and hard) and yoghurt made with milk from their own goat herd. Ardrahan also sell their goat’s milk.

Bandon Vale- Also from Cork, this is a commercial cheese-producer making a range that includes Vintage (a mature and nutty cheese), Murragh (Irish Cheddar) and Glandór (mellow Red Leicester).

Baylough– A hard-pressed and waxed, aged cheese made with milk from a herd of  Friesians and Red &White Dutch cows. They make oak-smoked and plain flavours as well as a version which contains garlic.

Beal Organic Cheese- The organic dairy farm of Beal Lodge is located in County Kerry produces organic "farmhouse"cheese and yoghurt. It is one of about 25 Irish organic dairies. Beal Lodge hosts a pedigreed herd of Holstein cows, which produce Wensleydale-style Beal cheese and a cheddar-style cheese.

Bellingham Blue- A soft blue cheese made with raw cow’s milk at the Glyde Farm in Castlebellingham, County Louth, Ireland.

Blarney- Made by Kerrygold, Ireland’s most famous butter producer, Blarney cheese (named after the famous Castle in County Cork) is a mild, semi-hard cheese made from cows' milk, which resembles Gouda. Kerrygold also makes Ballyshannon and Dublin cheeses.

Boilies- Small, fresh cheese-curds which are  hand- rolled and come in glass jars, where they are combined with oil and herbs. They can be used in cheese-salads or spread on wafers and breads. Boilies are produced at  Ryefield Farm in Cavan.

Burren Gold- This cheese is made in the Burren region of County Clare. Friesean cows graze on wild grasses in the fertile valleys in between rugged limestone hills, producing the milk for Burren Gold, a Gouda-style cheese. The cow’s milk is unpasteurized, which puts it into the "farmhouse" cheese category. Some cheeses made there are flavoured with nettles & garlic, fenugreek seed, black pepper, cumin and another variety is oak-smoked.

Carrigaline Farmhouse Cheese – Another very popular cheese in Ireland, Carrigaline has a  buttery texture and is an artisan cow’s milk semi-soft cheese made by Ann and Pat O'Farrell in County Cork (Carrigaline) under the ruined castle “Rock.”

Cashel Blue- Roquefort-style cheese made in Tipperary by the Grubb family, this is may be Ireland’s most famous cheese. Cashel Blue cheese is an ingredient used at Ireland’s top restaurants and featured in Irish cookbooks.

Coolea Farmhouse Cheese- Gouda-style cheese made with aged cow’s milk in Coolea, the hill-country near counties Cork and Kerry. Founded by a Dutch cheesemaker and now run by her son, Coolea is now considered one of Ireland’s classic cheeses.

Corleggy Farmhouse Cheese- The farm is located on the bank of the River Erne, between Cavan and Fermanagh counties. Quivy and Corleggy are goat´s milk cheeses, and their cow´s milk cheeses include Drumlin Traditional, as well as Garlic and Red Pepper, Cumin, Smoked and Green Peppercorn varieties.

Crozier Blue- An artisanal product made in Tipperary county by the Grubb family (Cashel Blue), this is a semi-soft, blue cheese made from sheep’s milk.

Derreenaclaurig- True artisan cheese made by Harry van der Zanden in the charming Kerry village of Sneem. The tiny production is made with milk from his Jersey cow herd. Limited-production cheeses by Mr van der Zanden range from plain and aged to cumin-flavoured, garlic-flavoured, and are offered in local farmer’s markets and restaurants.

Derrymore Cheese- Farmhouse cheese made at Claremorris in County Mayo.

Desmond- made in Schull in West Cork (same producer as Gabriel cheese). Desmond is a hard, raw-milk cheese.

Dingle Peninsula Cheese- Made in Kilcummin Beg, Castlegregory, in County Kerry. This raw cow's milk cheese is unique in that it is flavoured with seaweed. Owners Maja Binder and Olivier Beaujouan are luminaries among Ireland’s gourmet food fanatics.

Dubliner – Ireland’s most widely-sold Cheddar by is made in Ballineen (West Cork) by Carbery Natural Cheese. Dubliner is also made by Kerrygold. Dubliner cheese is matured for 12 months and has a slightly sweet flavour.

Durrus Farmhouse Cheese – this award winning cheese is made in a pretty section of West Cork, near the hamlet of Durrus. Owner Jeffa Gill was one of the artisan cheese pioneers of Ireland, who, together with Giana Ferguson of Gubbeen, and has been making cheese since the late 1970s--long before the ancient tradition of farmhouse and artisanal cheese-making began its renaissance. Durrus is round-shaped, aged, semi soft cow's milk cheese.

Gubbeen – Giana and Tom Ferguson produce Gubbeen cheese at their farm  in West Cork, just outside the picturesque hamlet of Schull.  They make both smoked and unsmoked artisan cheeses with cow's milk from their own herd.

Hegarty´s Cheddar- Dan and John Hegarty’s famous cheddar is made with their own Freisan herd’s milk in Whitechurch, Co. Cork. Excellent.

Killeen Farmhouse Cheese- This gouda style cheese is made by Marion Roeleweld (who is also a traveling cheese consultant for brands like Mossfield Organic Gouda) at the Killeen Millhouse in Ballyshrule (County Galway in Connemara). They make goat's cheese, plain cow's milk cheese, and herb and garlic flavored cheese.

Knockanore - Eamonn and Patricia Lonergan have been making their famous cow’s milk cheese in Ballyneety, County Waterford for decades. Knockanore cheeses come in plain, garlic and herbs, garlic and chive,black pepper and chive and oak-smoked versions.

Milleens- A fine farmhouse cheese made in the lovely Beara Peninsula of West Cork.

Mine-Gabhar- Organic cheese made by Luc and Anne van Kampen.

Mount Callan- Founded by Michael and Lucy Hayes in 2000 in County Clare, Mount Callan makes aged cheeses with cow’s milk from their own herd of Montbelliard cows and is produced during summertime through the traditional Cheddar process.

Oisin Farmhouse Cheese- These organic goat’s milk cheeses are made at a farm run by Rochus & Rose van der Vaard in County Limerick.

Old McDonnell's Farm- Located in gorgeous Glen of the Downs in Wicklow, this farm producesmany foods including goat’s milk cheeses.

Orla – Organic cheese made at the Manch Estate in Ballineen, County Cork. Orla is an unpasteurized, semi-hard cheese made with sheep’s milk. They also make ricotta, a cooked cheese.

St Tola Goat´s Cheese- from County Clare, these are both hard and soft goat’s cheese made employing the traditional French method. St Tola cheese is quite popular, and is an ingredient used in many top Irish restaurants.

St Killian- this Camembert style cheese is made from raw cow's milk and vegetarian rennet by the Carrigbyrne Farmhouse in County Wexford.

That's a general roundup of elegant cheeses made in Ireland. 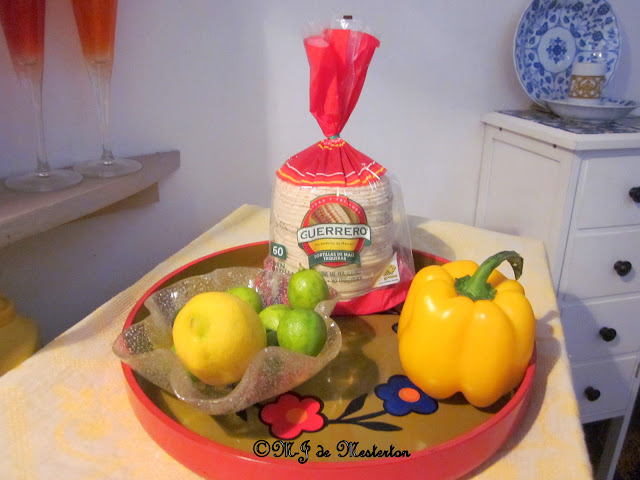 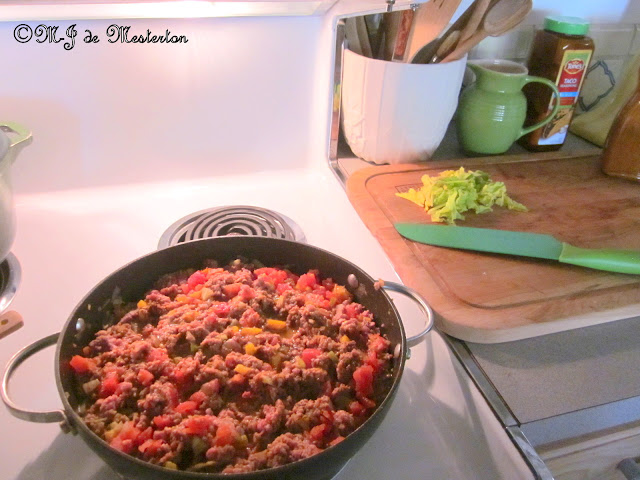 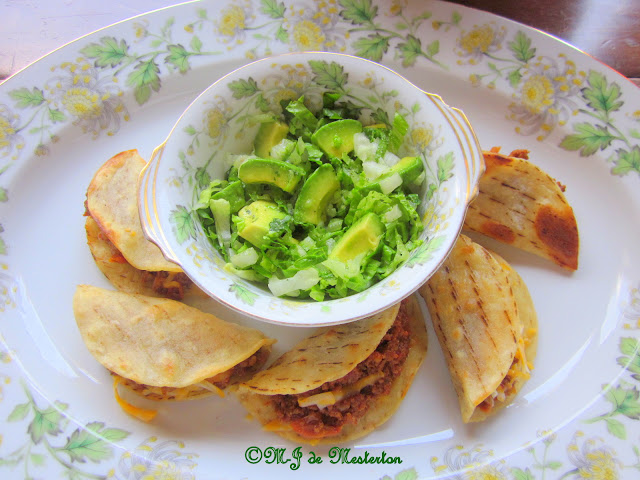 Miniature tacos are made with sautéed Guerrero corn tortillas, which are filled with a ground-beef-vegetable mixture and colby jack cheese. The bowl contains shredded Romaine lettuce and small strips of avocado, dressed with lime juice, cilantro (coriander leaf) and salt.
©M-J de Mesterton

Yam and Red Cabbage Salad for Health and Taste

Fill a hollowed-out pound-cake with ice cream, preferably vanilla. Trim the top (see left) so that it is thin at its bottom, and place it on top of the ice cream. Prepare regular meringue with egg-whites and sugar. Frost the ice-cream-filled cake with it and bake the assembled dessert in a medium-hot oven until lightly browned. 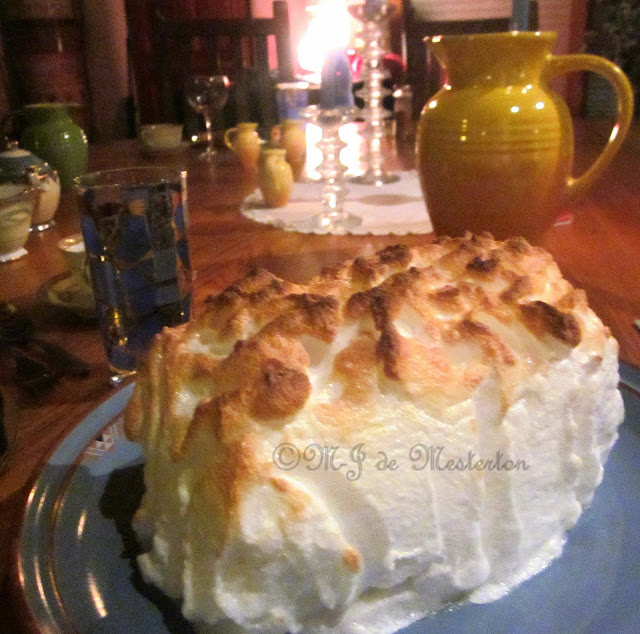 Bring your Baked Alaska to table while the meringue is still hot. Place the platter on a heat-proof pad or trivet. Cut this elegant dessert into sections and serve it as soon as possible so that the ice-cream filling will be cold and the meringue coating remains warm. ©M-J de Mesterton 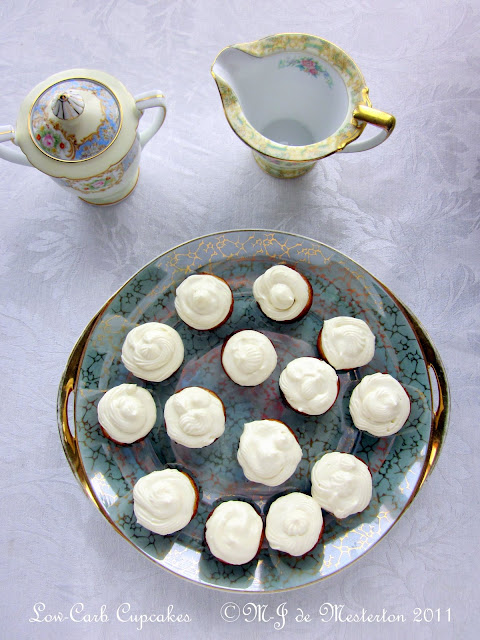 Ground almonds and coconut cream are mixed with egg-whites, vanilla and sweetener for a high-protein, low-carb tea cake that is also a perfect end to a ladies' elegant  luncheon.

Sliced poundcake is cut into two round pieces with a clean, empty milk can. Freshly whipped cream is piped on with a pastry bag, topped with sliced strawberries, topped with another round slice of poundcake and then dotted and decorated with more whipped cream and berrries for a classic, elegant strawberry dessert. 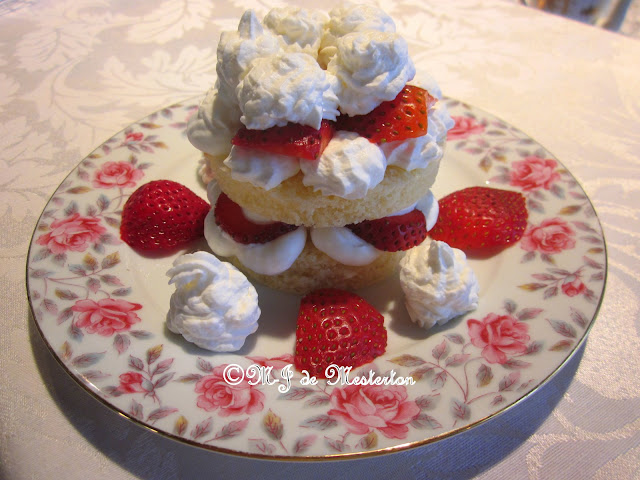 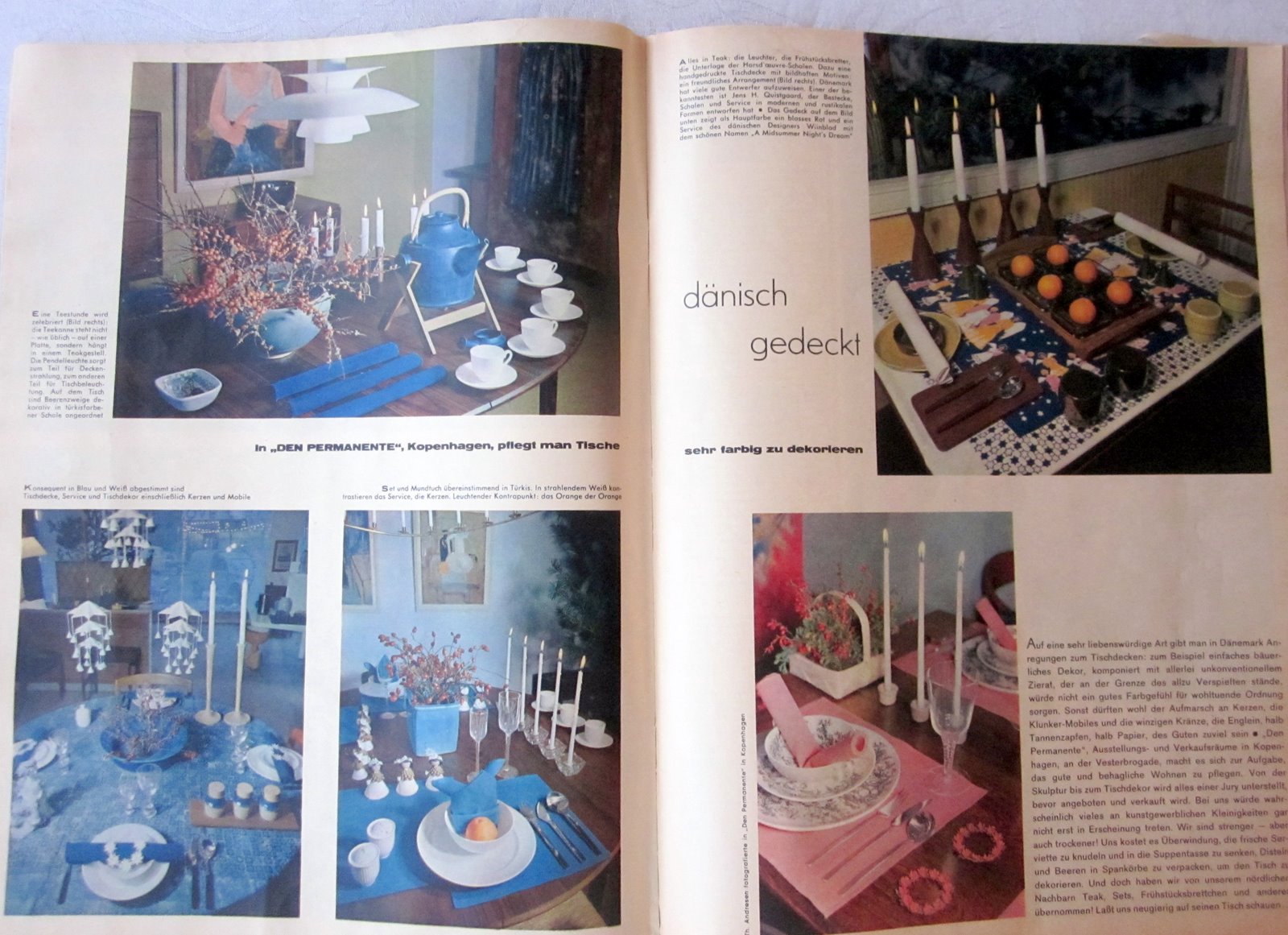 The very elegant and smooth St. Albray cheese from France's Bearn region in the Pyrenees mountains is formed in the shape of a flower, with sections shaped like petals. It makes an beautiful center-piece for a drinks-party table.